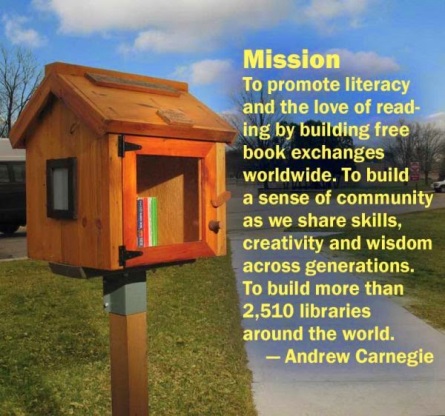 “One of the most tangible examples of Andrew Carnegie’s philanthropy is the founding of 2,509 libraries in the late 19th and early 20th centuries throughout the English-speaking world, including the United States, United Kingdom, Australia, and New Zealand. Of these libraries, 1,679 of them were built here in the United States. Carnegie spent over $55 million of his wealth on libraries alone and he is often referred to as the Patron Saint of Libraries.”

“It is said that Carnegie had two main reasons for donating money to the founding of libraries. First, he believed that libraries added to the meritocratic nature of America. Anyone with the desire to learn could educate themselves and be successful in America like he had been. Second, Carnegie believed that immigrants like himself needed to acquire cultural knowledge of America which a library would enable immigrants to do.”

For more information on Andrew Carnegie and his libraries…check out the following link:

Like Andrew Carnegie, I am a firm believer in Libraries, which is one of the main reasons that René and I are wanting to build our own Little Free Library.  If you are as passionate about books, reading and libraries as we are…please feel free to contribute!!!   We certainly appreciate it.